What is a French notary public ?

Notaries are lawyers with a mission of public service who draft-up contracts in an authenticated form on behalf of their clients.

The profession is regulated by the State, even though notaries qualify as liberal professionals.

The notary, a public officer

Acting on behalf of the state, appointed by the Minister for Justice, notaries give the deeds they wrote a guarantee of seriousness and authenticity. This means they have genuine public authority, received from the state.

Under the terms of Article 1 of the Order of November 2nd 1945 relating to the Status of Notaries: « Notaries are established public officials who receive all acts and contracts to which the parties must or wish to give the character of public authenticity ».

The notary, the professional of the authentication of acts

The notary has the power to authenticate acts by apposing his seal and his signature. Therefore the notary officially notes the desires expressed by the persons signing the deed and undertakes personally the legality of its content and the date of the act.

This act benefits from the same force as a court ruling. As such, the notary is the magistrate/actor of amicable justice.

The notary, a liberal professional

Although invested of public authority, a notary functions in a liberal framework, ensuring a modern form of public service without cost to the state, since notaries assume economic responsibility of their offices.

The notary is a liberal professional, paid by his/her clients (rather than by the taxpayers) at a rate fixed by the State for the services provided.

The notary, a professional present throughout the territory

Located throughout the country under a status defined by the Minister for Justice to fit the needs of the population, notaries provide a legal local public service.

Indeed, the notarial offices are not subject to an individual « numerus clausus » ( which would amount to limiting the number of notaries) but they are subject to a framed layout of their offices throughout the country to meet the needs of the population.

As a British citizen living in France, which law would govern the administration of her estate in case of incapacity ?

Under Article 3 of the French civil code, questions on capacity should be governed by the national Law of the person to protect and thus, a French Jurisdiction dealing with the incapacity of a British citizen should normally not execute French Law but English or Welsh law provisions.

However, common Law rules on incapacity only apply when the Hague Convention dated the 13th of January 2000 is not applicable…

That convention was ratified in 2009 in France so as in England… but more recently.

The Hague convention foresees that the Law of the habitual residence of the person to protect should be the Law applicable to deal with his/ her incapacity.

That means to answer the above question that a British living in France should be aware French law will apply In case of Mrs Brown’s Incapacity.

Would that power of attorney be applicable and enforceable abroad ?

Yes the POA made in France will be enforceable in England so as the EPA made before by Mrs BROWN when she was living in England.

However Mrs Brown could also opt for her national law by written (article 15 of the Hague convention) and subsequently sign a LPA.

As I said, the two countries have ratified the Hague Convention of the 13 of January 2000 on the International Protection of Adults.
France and Britain are also experiencing similar type of mandate to organize in advance protection over incapacity.

Same protection is admitted towards children with disabilities.

According to Article 15 of the Convention, the mandate of incapacity is “powers of representation granted by an adult, either by agreement or by a unilateral act, to be exercised when such adult will be unable to fill in his interests « .

As such, many of the countries law do not give effect to the mandate until the inability is established by a judicial or medical expertise. This is the case in France (art. 481 of the Civil Code) but also in England.

According to Article 15 of the Convention « the mandate is governed by the law of the State of the habitual residence of the adult at the time of the agreement or unilateral act« .

In other words, an Englishwoman living in France can quite agree before a French notary, on a mandate for future protection according with French law rules. When that person will fall incapacitated and will be in the inability to manage her property, her designated attorney may represent her and manage her property, both in France and in Great Britain, where the Hague Convention is in force.

Should I review the Will I did two years ago ?

Of course, that review of your Will over the new EU rules should be advised at least to be sure English law will be applicable. There will be no more need to set up SCI so as to insure the estate will be governed by the English law upon someone’s death.

And because there is now a unique law for the succession we must check that different Wills eventually spread over the different countries by the testator are compatible.

Why should I write a Will since I am not French?

As said just before, the Will can be done in France or in England and will be enforceable in both countries provided the laws of that country were respected when the Will was drafted.

In which forms should I write my Will ?

With respect of my previous answer the forms must comply with the rules set up by the Hague Convention.

In France a will can be drafted on a mere sheet of paper but it has to comply with our legal rules to be handwritten, dated and signed.

In England, same Will must witnessed by two peoples who cannot be the beneficiaries.

Would my English Will be valid under French Law ?

Yes it will but because of the new rules in Europe you should be careful that its previsions comply with EU rules.

I am not French Resident but I own a second home in the French Alpes, should I draft a Will ?

It might be not necessary to draft a will in that case in France since the law applicable upon your death will be the law of your last domicile, ie: England.

England for the House in French Alps will consider French Law is applicable and France will accept the claw back under provision of the new EU article 34 .

That means whether you are happy to leave your second home in France to your children that French will apply.

However, if you want to leave that house to your wife, then you must elect in your Will the English Law.

What does imply the "forced heirship system"

Our legal system is totally different of the English Legal system since when someone dies, their next of kin are seized automatically by the dead.

On the ground of French law, children are highly protected from deprivation.

Indeed French Law set up a “forced heirship” which is variable with regard of the number of children someone may have. 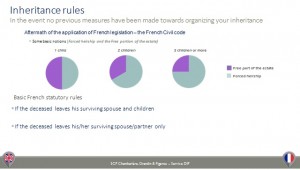